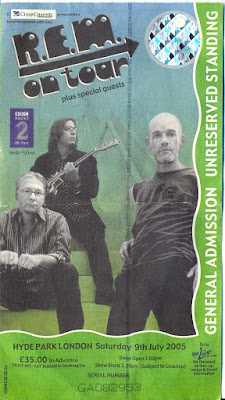 The second outing for me and Mrs M to see REM came in 2005. The gig was originally scheduled for 9 July (a week after Live 8 at the same venue) but was put back a week following the London bombings on 7/7. The special guests were Jonathan Rice, Idlewild and Feeder. I remember Idlewild being excellent, though they did prompt Mrs M to say "Oh, they're the Scottish REM".

I also remember enjoying this show a lot more than the one at Milton Keynes ten years earlier. We secured a good vantage point front right and the show was completely different in feel. Where MK had been dark, sombre and moody this was sparky, bright and uplifting. Not even the appearance of Patti Smith for the dirge that is E-bow the letter could spoil the mood. That might have been because it was the last date on their world tour, but whatever the reason they were superb. Stipe in particular was at his electric best. They finished with I'm Gonna DJ which was unreleased and new to me at that point, but stuck in my head for ages after. Inevitably the recorded version when it finally surfaced didn't have the attack of the live version. All in all a great show.

Saw them the week before, in Ipswich. A short speech about the bombings and why they were going ahead with the gig, the phrase "We are REM and this is what we do" and the best version of "Everybody Hurts" anyone could hope for to open the show. Thinking about it still brings me out in goosebumps to this day.